ACEMS members receive a great deal of recognition for their work by organisations outside of the Centre. While this is very significant, our Centre recognises the importance of also highlighting and celebrating the work and achievements of its own members internally. 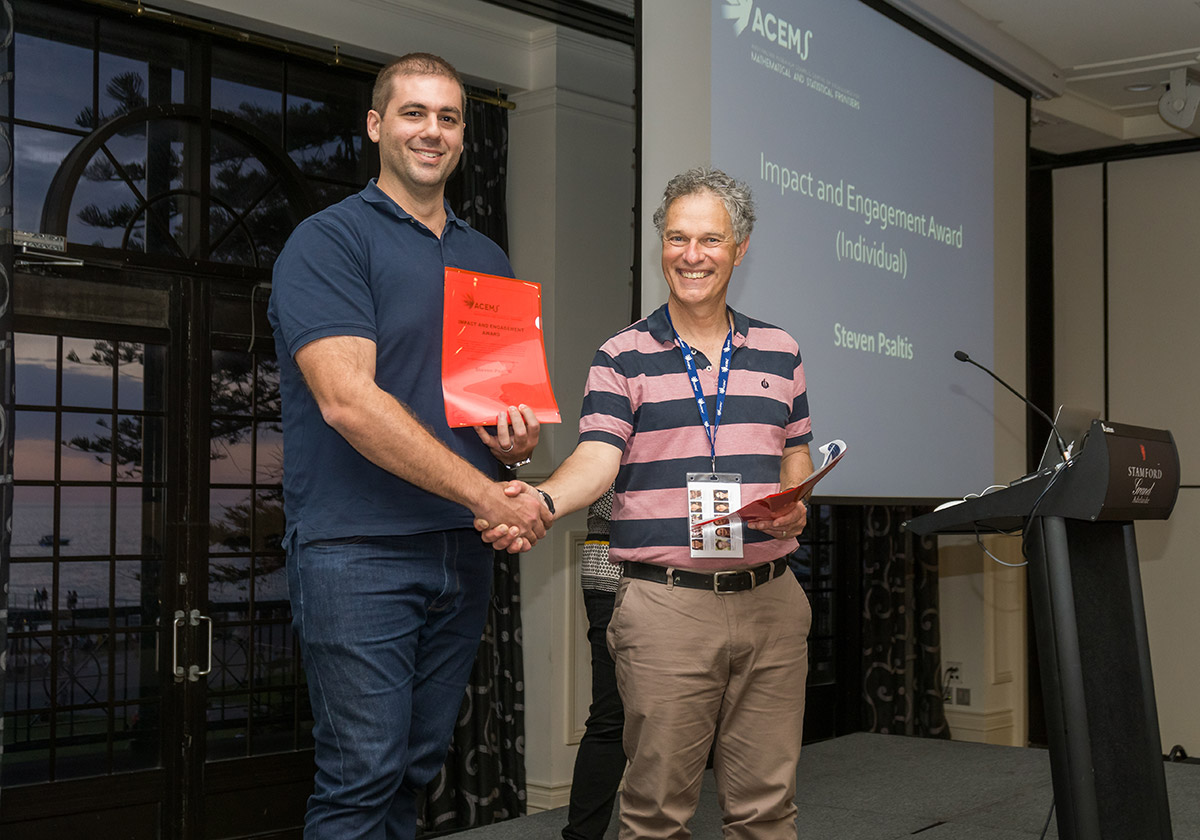 Steve was selected for his ongoing strong involvement in translating and communicating his research to industry and the community. That includes his collaboration with the Queensland Department of Agriculture and Fishers (DAF), and his wide range of outreach activities in STEM through which he promotes ACEMS and encourages students to pursue a career in mathematics. 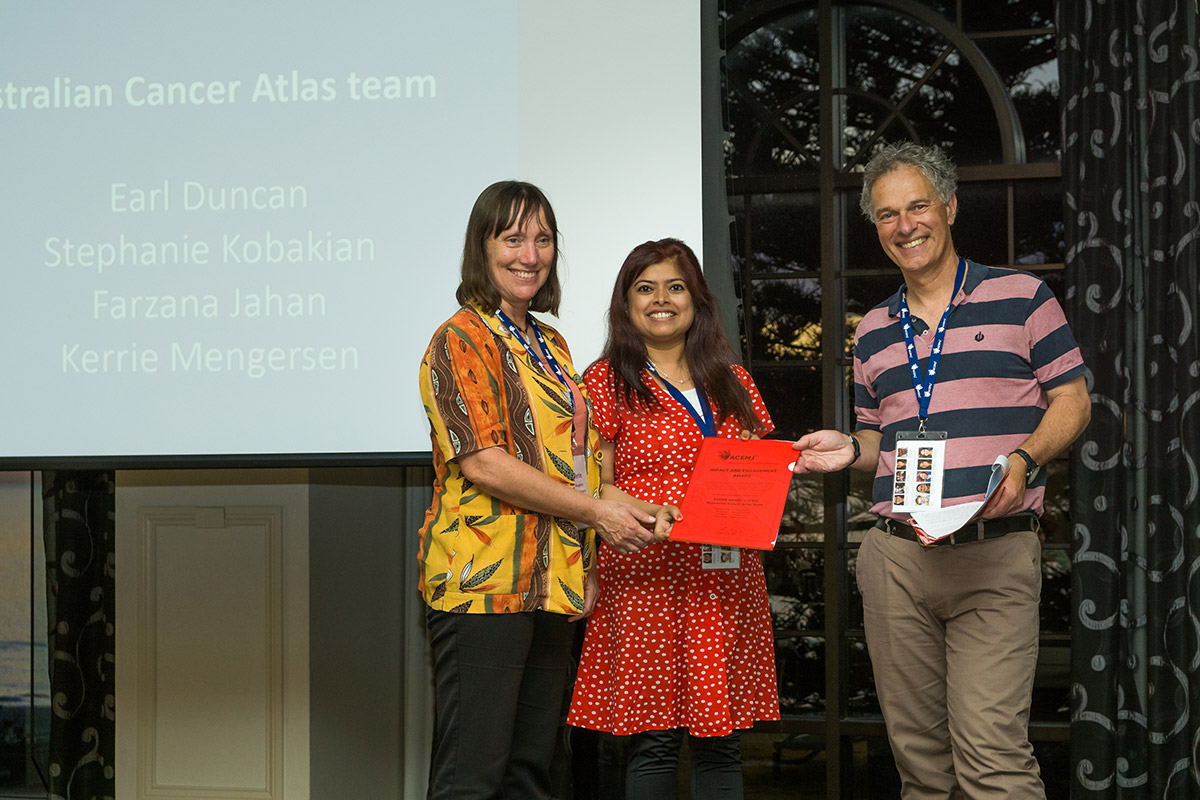 The Australian Cancer Atlas is a stellar example of engagement and impact by ACEMS researchers. The Atlas is an interactive, online map designed to show how the burden of cancer varies across small geographical areas for the whole of Australia. It is underpinned by Bayesian statistical models and novel visualisations developed by a multidisciplinary research team across multiple nodes of ACEMS, in collaboration with an ACEMS Industry Affiliate Organisation, Cancer Council Queensland. 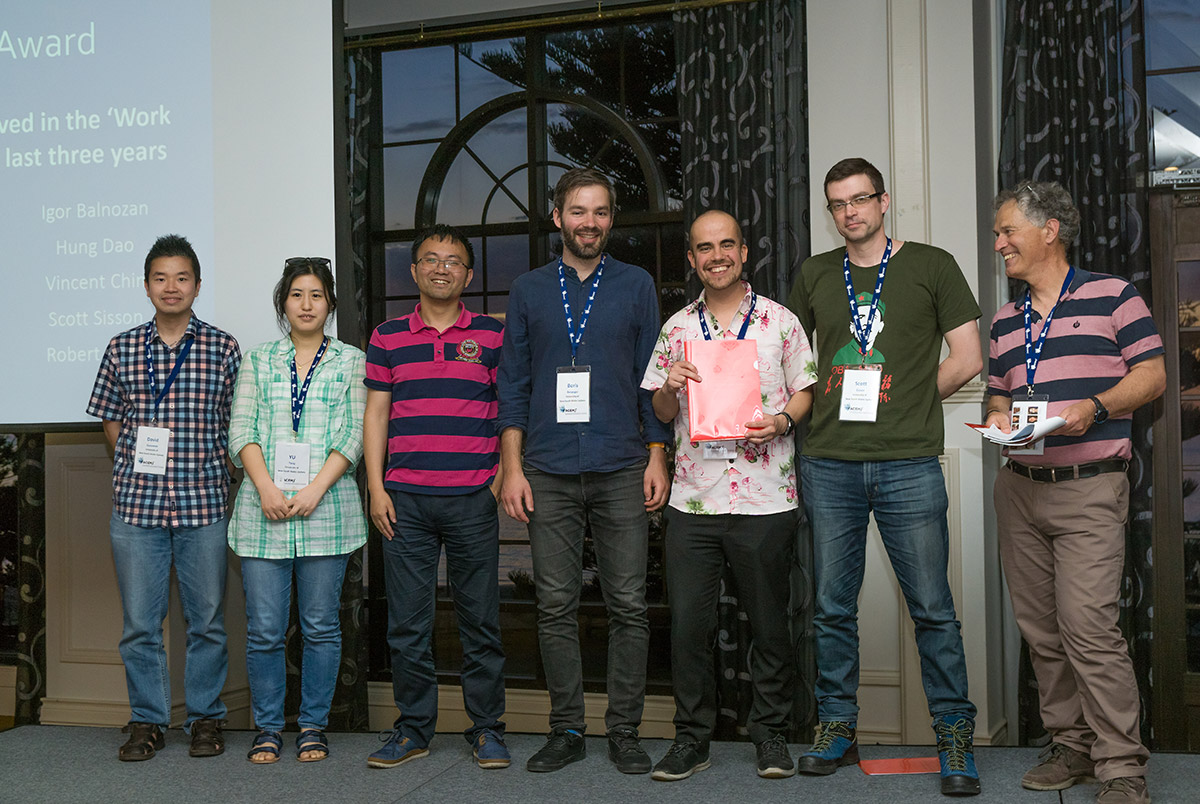 ACEMS' UNSW node have developed and run a highly successful work experience program whereby Year 10 students from local schools spend 1.5 weeks at UNSW to learn data science and coding in R and R-Markdown. This program could not have been implemented without the involvement of each PhD Student, Postdoc, Associate and Chief Investigator, and is an outstanding group achievement. This program is still growing, would not have been created without ACEMS, and will be a proud ongoing legacy of the Centre. 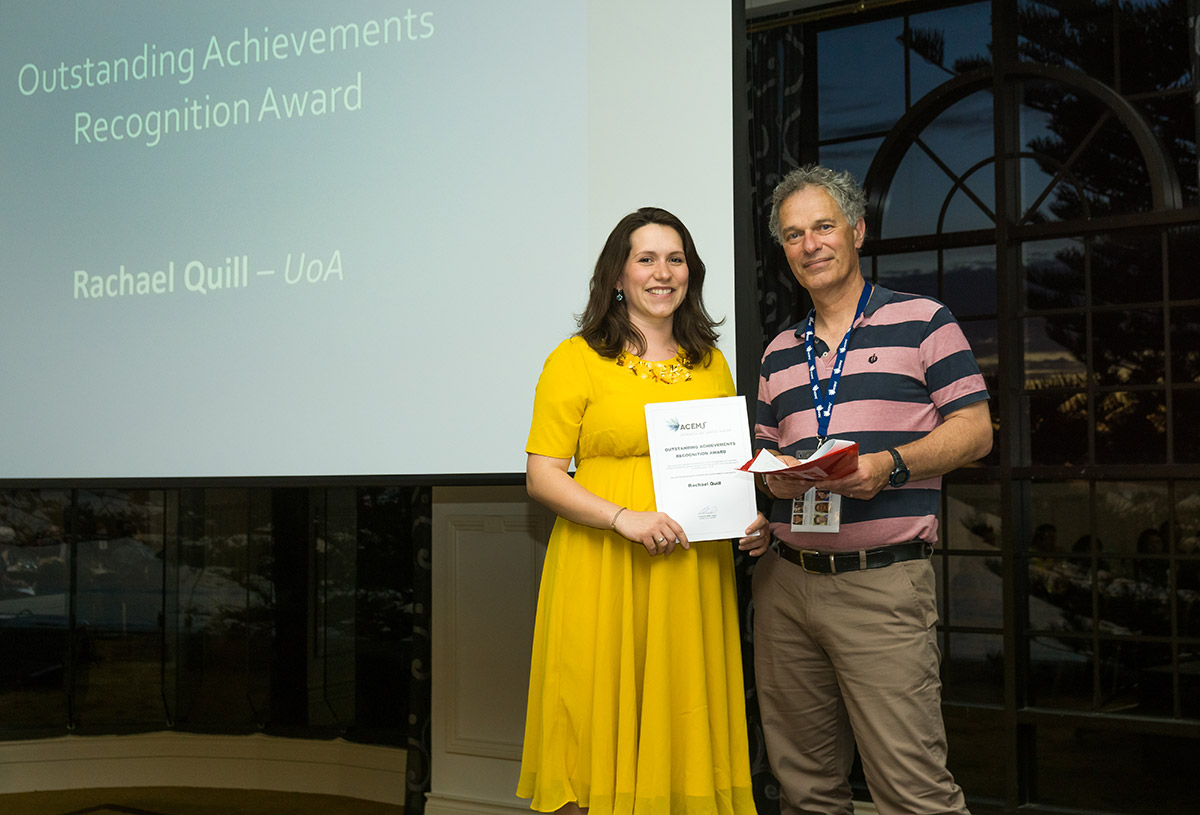 Dr Rachael Quill (Adelaide): Rachael has been Chair of the ACEMS’ Early Career Researcher (ECR) Committee and an important member of the Centre’s Equity and Diversity Committee. She has led a successful Industry Collaboration Support Scheme application with QUT and DST Group. Along with Associate Investigator Mel Humphries and (non-ACEMS HDR student) Kim Becker, Rachael led the development of the inaugural International Women in Maths Day celebration in South Australia. 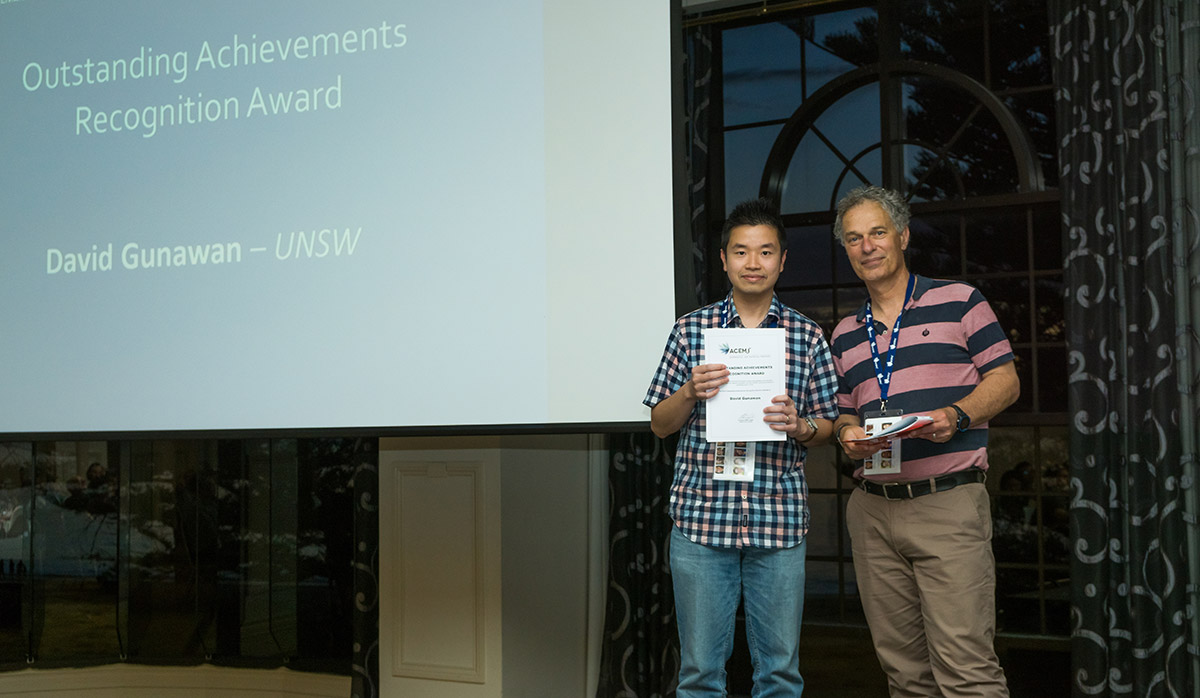 Dr David Gunawan (UNSW): David has developed breakthrough statistical methods to efficiently estimate Evidence Accumulation models in Cognitive Psychology. To do so successfully, David has developed a close collaboration with Professor Scott Brown of the University of Wollongong, who in a recent survey was deemed to be the pre-eminent researcher in cognitive psychology in Australia. 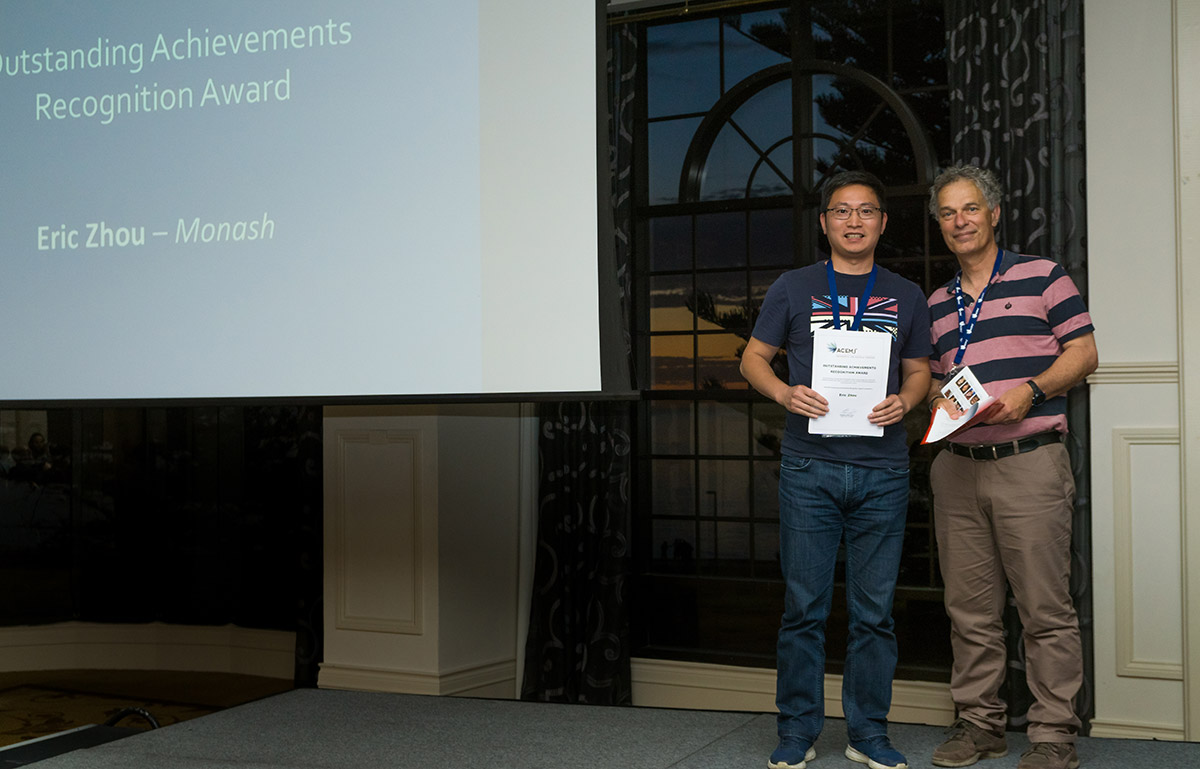 Dr Eric Zhou (Monash): Eric has made significant recent contributions to high-dimensional statistical mechanics. In particular, he has pioneered the theory of "random-length random walks", which provide the correct picture for quantitatively understanding the effects of boundary conditions on the behaviour of high-dimensional statistical mechanical models near continuous phase transitions.

Professor Fawang Liu (QUT): During his period as an ACEMS Associate Investigator, Fawang has received two University Outstanding Performance Awards and has been listed as a Thomson Reuters Highly Cited Researcher every year since 2014 for his work in the field of fractional calculus. He has actively engaged with other ACEMS researchers and students on the development of new computational models and numerical models for a range of problems involving fractional dynamical systems. He has also established strong collaborative links with a number of prestigious universities in China. 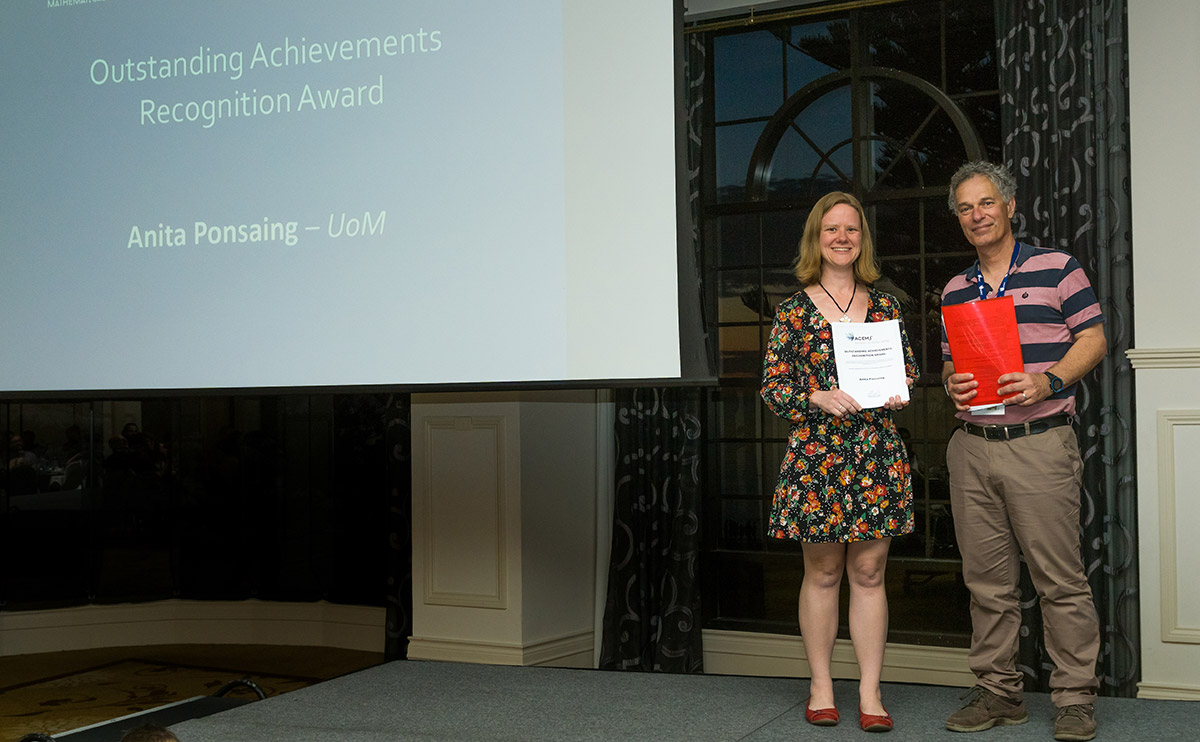 Dr Anita Ponsaing (Melbourne): As ACEMS Outreach Officer, Anita has helped lead the development and growth of ACEMS’ flagship outreach program, MathsCraft. To do this, Anita has managed to build mutually respectful relationships with teachers around Australia over the last four years and in the process helped them to understand the mathematical behaviours that they need to adopt and, in turn, help students to adopt.

Congratulations to all these ACEMS members for their outstanding work and contributions!